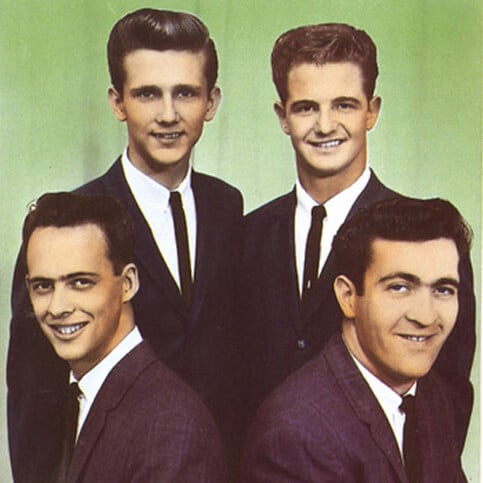 The Castells (Chuck Girard, Joe Kelly, Tom Hicks and Bob Ussery) were a male vocal quartet formed in Santa Rosa, California. They cut a demo tape and went down to L.A. to see if they could drum up any interest from the record labels. Era Records liked what they heard and signed the guys up. Their first release, “Little Sad Eyes”, bubbled under. Their second effort, “Sacred”, was the one that broke them nationally. “Sacred” was well-received at radio and worked its way into the Billboard Top 20 in the summer of 1961.  They followed with another near miss “Make Believe Wedding”. In 1962 the sweet ballad “So This Is Love” would be their second claim to fame. It would also chart in the 20s on the Hot 100 and fare even better on the Adult Contemporary chart.

The Castells broke up in 1965. Chuck Girard would go on to record with The Hondells and later founded the successful Christian music band Love Song.

K-tel has all the Castells original Era recordings.

Clown Prince (written and produced by Shel Talmy) (one stop)

I Get Dreamy (one stop)

My Miracle (one stop)

The Vision Of You (one stop)

Dancing In The Dark

Echoes In The Night

On The Street Of Tears

What Do Little Girls Dream Of